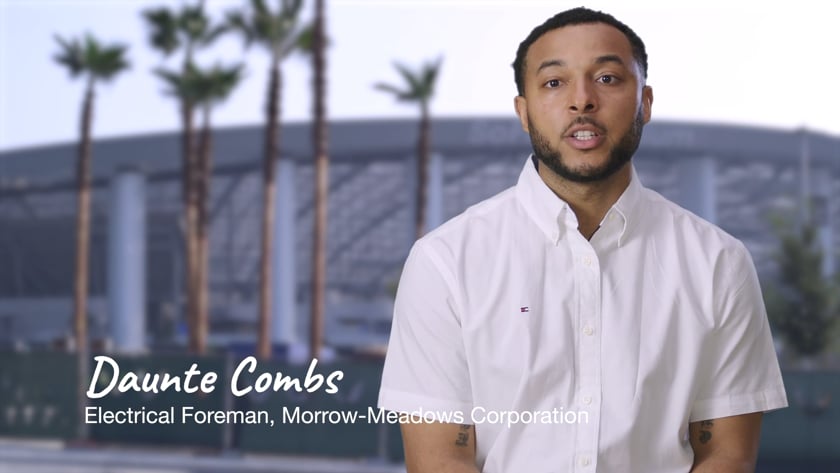 For Daunte Combs, a 2007 alumnus from Ánimo Inglewood Charter High School, success is simple: It’s about being content with where you are in life. And through a winding journey, Combs has held on to this outlook as a commercial electrician.

Born and raised in Inglewood, California, Combs grew up in a household where hard work was the only work, and his parents encouraged tenacity. “I learned from them both,” Combs said. “I learned how to work through difficult situations. And I want [my children] to get that same motivation.”

Combs’ mother enrolled him into Ánimo Inglewood, where he took advantage of the small class sizes and tight-knit community. “Because it wasn’t so big, it was easy to make friends and become closer to the teachers and staff.” Teachers like Sue Jean Hong, Combs’ 10th grade history teacher, made him feel safe, acknowledged, and determined. “She was just down to earth. I knew that she cared about us and where we went in life post high school.” Combs said. “We were like family to her.”

Throughout his remaining years in high school, Combs found even more support in his teachers and football coach.Their warm welcomes, open doors, and career-oriented conversations encouraged Combs to forge his own road to success. Duante was my student in world history class, my very first year of teaching. He was always a really curious and engaged student,” recalled Sue Jean Hong, principal at Animo Inglewood. Even now, Combs acknowledges that these same mentors taught him critical life skills that would guide him along his career. Prioritization, according to Combs, was one of the most important skills he learned in high school.

After Combs graduated from Ánimo Inglewood, Combs completed a 5-year program at the Electrical Training Institute (ETI). He had briefly attended a four-year college before deciding that a better path for him was more practical. He knew he had to prioritize his happiness to remain committed to his career.

Combs joined 2nd Call, a community-based organization that prepares individuals with job readiness, life skills, and socio-emotional coping techniques. Through a series of courses and volunteering opportunities, Combs landed an Electrician apprenticeship. Through his newfound joy in electricity, he became a journeyman electrician and completed the program at ETI. “I just fell into an opportunity that I felt that I needed to do, and I took pride in it and that’s why I’ve been successful at it,” Combs said.

Hong, isn’t surprised by her former student’s ability to find success in an engaging and rewarding career. She recalls seeing him at Animo Inglewood’s 10 year reunion and being proud that the engaged teenager who sat near the front of her class a decade ago was now a passionate and determined young man. She’s reminded of the excitement and pride he had about his work. “The way that he talks about his work is not how most people talk about their work,”said Hong. “And, you know, I get to think about him every time I drive down the freeway because he worked on the Banc of California Stadium.”

For the last four years. Combs has served as a foreman for Morrow-Meadows Corporation, an electrical contractor based in California. Combs oversees lighting and is responsible for every light system in the building “from the switches to hanging lights. I’m in charge of it all,” he said. Recently he has worked on lighting projects in Inglewood’s new SoFi stadium and the upcoming additions to LAX.

After achieving his electrical license, Combs has made it a mission to pay advice forward, because so many have contributed knowledge to his own life. “I have become a better man, period. Now I have people that used to be in the same position as me that I can help become better as well,” he said.

Looking towards the next step in his career, Combs hopes to take on a managerial position and become an electrical superintendent. In this role he would plan and design electrical systems while managing quality control and job site safety. He views this career path as an opportunity to lead and guide others to success. But to Combs, success is more than a prestigious position, “it’s in the heart and soul. It doesn’t matter about money. If I’m helping someone or doing things that make me feel well in my soul, that’s success to me.”