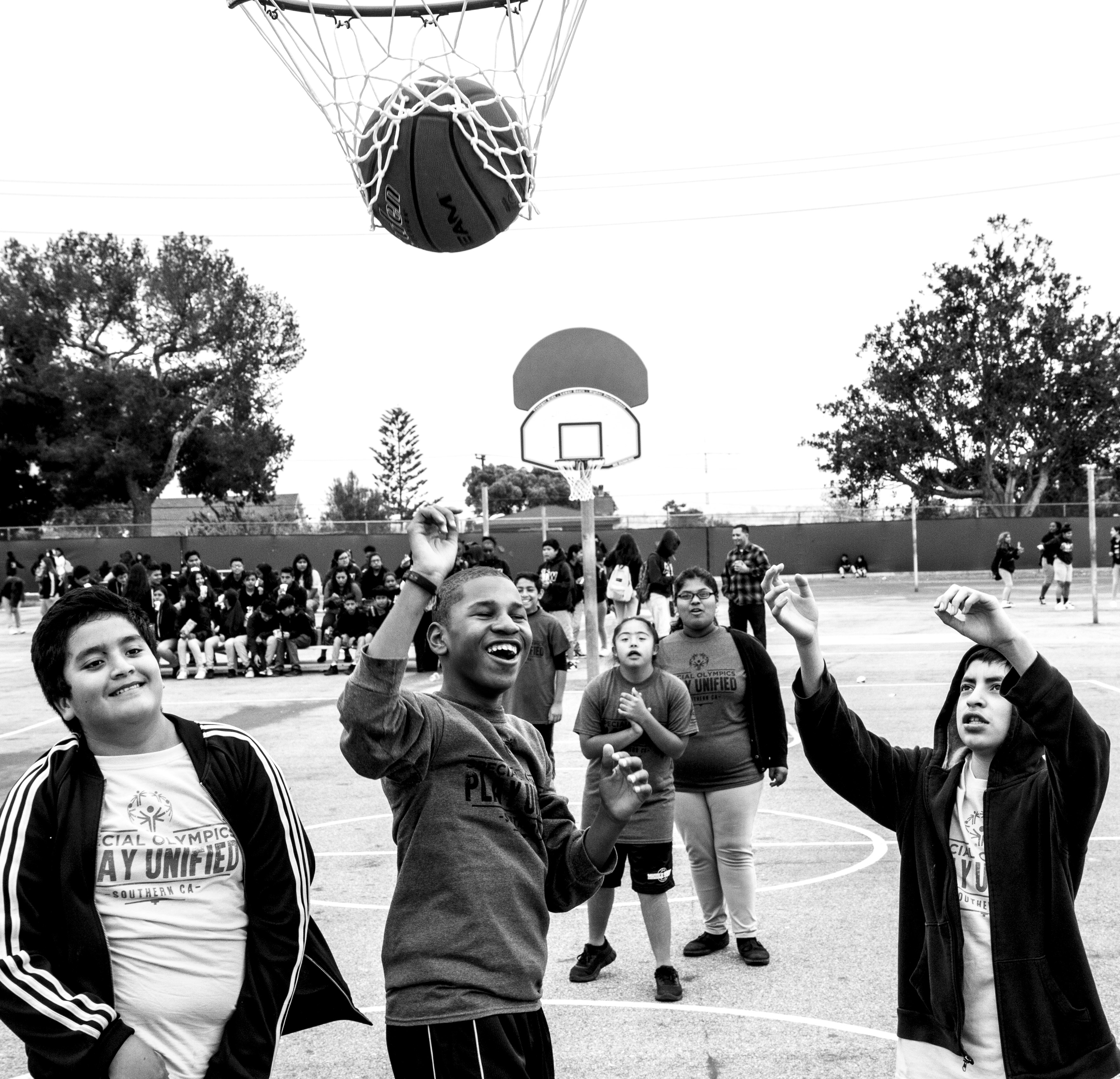 The thumps of basketballs hitting the pavement were muffled over the applause of the audience, as Ánimo Western Charter Middle School and Ánimo Phillis Wheatley Charter Middle School students played in their first Special Olympics Unified Sports game. Each team was made up of a mixture of students with and without learning disabilities, all playing for the love of basketball.

This basketball game was the result of a collaboration between Ánimo Western, Ánimo Phillis Wheatley, DirectEd educational services, and Special Olympics Southern California. DirectEd provides our students with disabilities additional speech, nursing and adaptive physical education services at Ánimo Phillis Wheatley and Ánimo Western. They were the lead collaborator with Green Dot and Special Special Olympics Southern California, bringing everyone together to begin Unified Sports programming at both schools.

Special Olympics Southern California provides consultation, education, support and assistance to schools to help promote social inclusion between individuals with and without disabilities through sports. Their Unified Sports program was inspired by a simple principle: that training, playing, and competing together is a quick path to understanding, acceptance, and friendship. Students were nervous in anticipation of their debut — in a few short hours the moment they’d practiced for would be upon them. Rows of small bleachers lined the edges of the campus blacktop. As the first teams took to the basketball court, students on the sidelines cheered and thrust signs in the air, supporting their peers. The crisp swish of the basketball rushing through the net brought the audience to their feet.

“The best part of the game was when I fell, because my team helped me up and I was able to continue playing,” recalled Jaden Hill, Ánimo Western sixth grader.

For some students, the feeling of a basketball’s dimples and leathery texture rubbing across the palms of their hands was second nature, but for others it was a new sensation. So in order to get ready for the big game, students spent six weeks going through basketball drills, practicing shooting techniques, establishing team dynamics, and gaining a better understanding of the game. Ross Moore, Adapted Physical Education teacher at Ánimo Phillis Wheatley and Ánimo Western led the training, working with coaches and students to prepare for the game. During this time, students also developed a greater understanding of one another, and learned what it takes to build and be a part of a cohesive team.

“When the program first started, many of the athletes were unsure of having teammates with disabilities,” said Moore.

“But with good coaching and consistent practices, new friendships were made through a positive and inclusive atmosphere.” 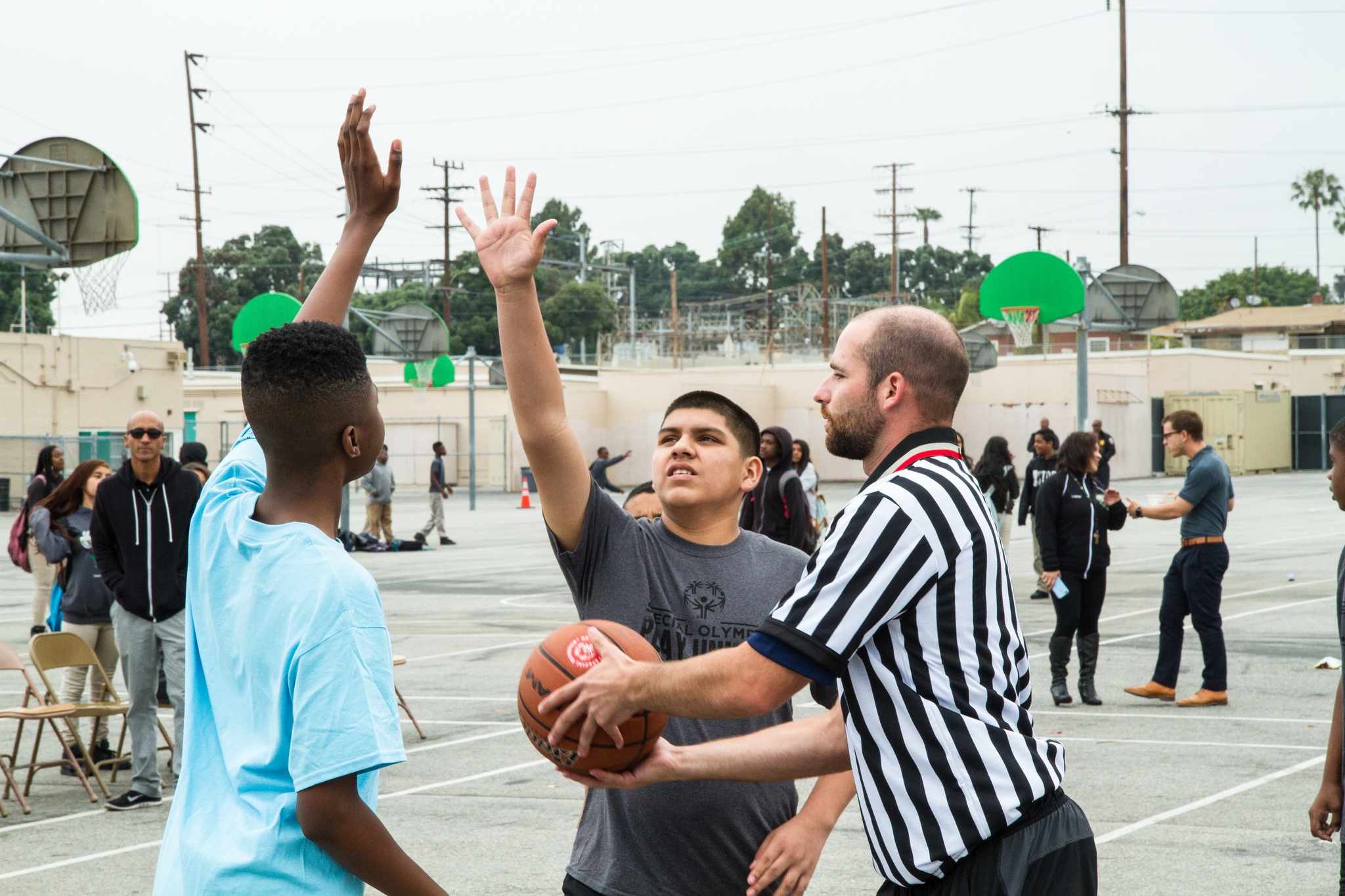 For both Ánimo Phillis Wheatley and Ánimo Western, this experience was more than just a basketball game, it was an opportunity for students to overcome a challenge together by understanding each other’s unique strengths and needs. “Playing in Unified Sports was a fun and exciting experience, and I got to meet new friends,” said Vanessa Armas, Ánimo Western sixth grader. Green Dot’s network of schools serves more than 1,300 students with disabilities, each of whom receives services and support through an individualized education program administered through a variety of channels. These services and methods help cultivate a learning environment that promotes inclusion, diversity and leadership. Our partnership with Special Olympics Southern California, and with all of our valued partners, helps us create a positive foundation for activity between all students, regardless of abilities.

“This was definitely a learning process for both the students and myself as a coach, establishing the team dynamic was difficult at first,” said Wendy Mencos, Physical Education teacher at Ánimo Phillis Wheatley. “But the end result was remarkable — my students were taking the lead in supporting one another and complimenting each other’s skill levels.”

Taking it Off the Court After the success of the basketball game, students and teachers are looking to Moore for the next chapter of Unified Sports at Ánimo Phillis Wheatley and Ánimo Western. “The best part about Unified Sports is watching the teammates’ relationship grow, in fact I have so many students advocating for doing it again next year,” said Moore. “When I asked students what their favorite part was, a lot of them said ‘when I scored!’” Next year may see a steady growth in Unified Sports at both campuses, with Moore hoping to collaborate with teachers to start a Unified Sports soccer team.

Our collaboration with Special Olympics reinforces our belief that Special Education is a program, and not “a place” for students. It contributes to the mission of breaking down stereotypes about people with disabilities, and underscores our belief that “all students” means all.